Item 3 – President Kathryn Lewis presented her report for the year April 2020 – March 2021. You can read that report here: President Report.

Item 4 – Treasurer Barbara Gregg gave her report for the financial year and got approval from members for the accounts and the reappointment of the auditors. The full accounts are available to members here

Item 5 – Kathryn Lewis reported on the change of Board Directors, thanking Lizanne Steenkamp and Dr Tim Wilding who have now completed their terms of office (Lizanne serving the maximum of two terms and Tim serving one term). Kath welcomed two new Board Directors – Dr Saima Rajasingam and Keiran Joseph who have been elected to serve three-year terms.

Item 6 – The BAA President for the next year has been confirmed by Board as Kathryn Lewis and Samantha Lear will serve one more year as Vice President.

The BAA Board acknowledged the commitment of Sue Falkingham to the work of the BAA with an Honorary Membership award. Sue spent an incredible 10 years on Board. After serving the maximum two, three-year terms, followed by one year as Vice President, was our first two-year President and finished with one year as Immediate Vice President. This is the longest ever served on Board. But she has finished there as

Sue has continued to represent the BAA with her work on the Joint Guidance in Audiology & Otology during Covid-19 document. Sue has very much been at the forefront of this work, spending hundreds of hours researching, writing, checking, collaborating and talking about the joint guidance work. BAA Board would like to sincerely thank her for her continued support in this area. 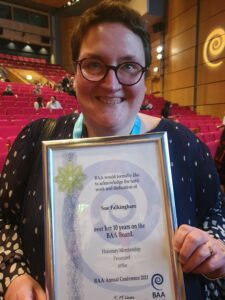 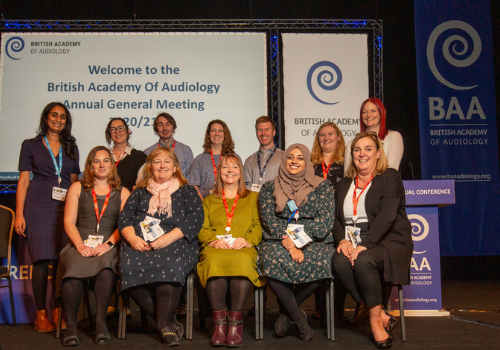 (Barbara Gregg is missing from the photograph)